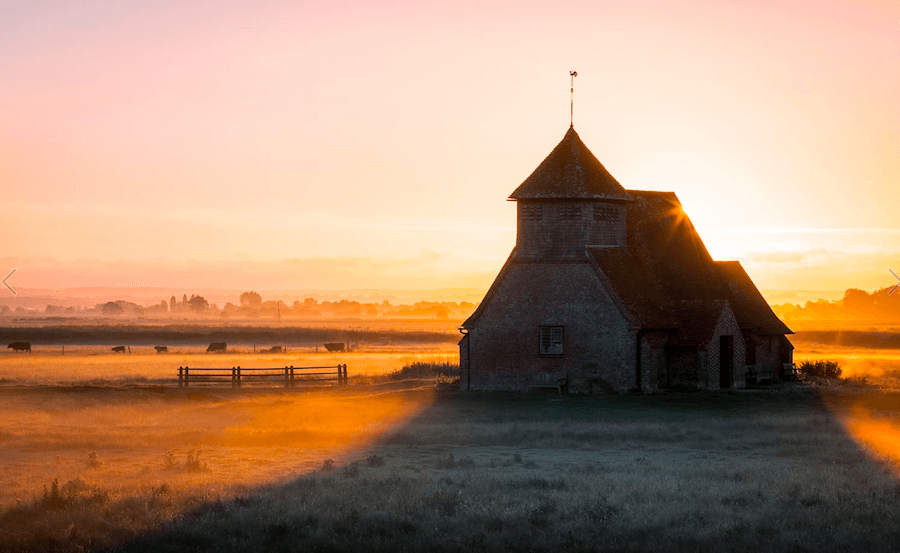 Romney Marsh has always had an otherworldly quality, particularly when the morning mists hang low around its ancient churches. These 100 square miles on the Kent and East Sussex coast were identified for centuries with smugglers.

Malaria, or “marsh fever”, was eradicated only in the 19th century. Now, Dungeness nuclear power station, built on a shingle spit beyond the marshes, dominates the views to sea – and yet Romney Marsh is home to so many species of bird, plant and insect that it is one of the most important nature conservation sites in Europe.

This patch of pristine wetland near the south east coast covers a whopping 100 square miles and is packed with wildlife – including the curious ‘laughing frogs’ which you can also hear in the ponds at Whitesand.

Come here from April to June and you’ll probably here them, cackling away to females who are looking for a good time. They’re big, too – growing to the size of an adult’s hand – and have even been known to eat small birds.

However, the most surprising thing is that they’re all descendents of a single batch of 12 Hungarian marsh frogs, which the former MP for Ashford’s wife bought for him back in 1932. They made it to the marsh after escaping from the garden, and haven’t looked back since.

Of course it’s not all just frogs. There are other curious creatures like smews and wigeons (actually types of duck), and cute creatures like water voles ferreting about on the banks.

There are tons of walking trails and cycle paths threading through the area, so why not bring a picnic with you and make a day of it?

The marsh has a colourful history that has seen invasions, numerous threatened attacks and smuggling.

From the 13th century, Marsh nights echoed to the eerie calls of smugglers nicknamed Owlers, their doings immortalised by Russell Thorndyke’s fictional character Doctor Syn, an upright Dymchurch vicar by day but smuggler by night.

The wool of the Romney Marsh sheep is thick, dense and high quality; it was in great demand in France during the 17th and 18th centuries. The high Custom and Export Taxes imposed encouraged an illicit trade in the fleeces which were smuggled from the Marsh to France. Most smuggling took place at night – the eerie calls that the smuggling men used gave them the local name of ‘Owlers’. In 1698 most of the fleeces of the 160,000 sheep shorn on the Marsh were smuggled to France.

If you’re looking for a change of scenery, why not give the atmospheric Romney Marshes a visit during your stay in one of our coastal cottages