Whispers, hidden alleyways, narrow cobbled streets and closely built houses interconnected by attics and cellars, lights at sea… tales of smuggling tease your imagination all along our historic coast.

Follow in the footsteps of the infamous smugglers and uncover the secrets of villages and towns whose prosperity relied on the smuggling gangs. Then go ‘behind the scenes’ of your favourite books and writers – you might be surprised just where they drew their inspiration. 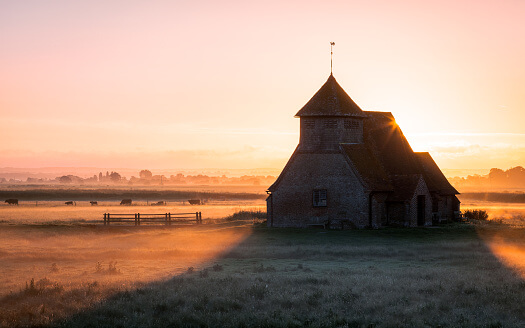 Half close your eyes and you can picture darting figures, bringing ashore at Camber their contraband: Brandy for the Parson, ’Baccy for the Clerk; Laces for a lady, letters for a spy… Enjoy the thrill of the chase and get hot on their heels with a break beside the sea!

The Kent and East Sussex coast, so near to the Continent, was prime territory for ‘free trading’, no place more so than remote brooding Romney Marsh. To this day you feel far away from the bustle of ordinary life here, the squat Romney Marsh sheep still grazing as they have for centuries. When massive taxes on exports of wool were imposed in the 13th century, ‘Owlers’ made fat profits from smuggling fleeces to weavers on the Continent.

Explore their haunts, including the medieval marsh churches: look in Snargate church for the wall painting of a ship dating from 1500 – smugglers’ code for a safe place to hide illicit goods. And soak up the atmosphere of the old Woolpack inn near Brookland, once a smugglers’ base. The contrabandists were nicknamed ‘owlers’ because they communicated by hooting at dead of night and they came from all sections of society. Flick through Russell Thorndyke’s Dr Syn novel (1915) and you’ll find even the vicar of Dymchurch led a double life as a smuggler. 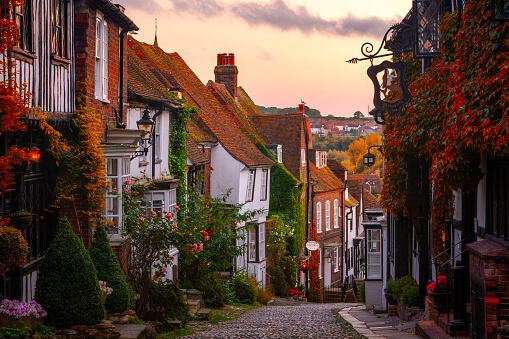 The ancient port towns of Rye, Winchelsea and Hastings would have been piratical places in the 17th and 18th centuries, with smuggling, rampant. The Inns and taverns would be full of smuggling gangs and pirates all armed to the teeth and ready to kill if challenged by the customs officials.

The prosperity of these port towns depended more on smuggling than any other trade. Rye in the 18th century was dubbed the ‘smuggling capital of England’ it’s smugglers were treated with leniency and charges were often dropped, mainly due to the towns corrupt officials who were often paid off and benefited by the service the smugglers provided or went ‘missing’…

The leaders of the infamous Hawkhurst Gang, used to meet openly at Rye’s, Mermaid Inn, carousing and smoking their pipes, with loaded pistols on the table before them. Their notorious reputation meant that nobody would interfere with them.

They were the ‘mafia’ of the early 18th Century. The Gang was appreciated by the poor for employment after the demise of the wool and iron industries, and by parsons and others for duty-free ‘baccy’, brandy and tea

Book a smugglers break and you will receive a map where you will find the key landmark sites associated with the dastardly exploits of this infamous gang of smugglers. At each place identified with a symbol, you will find further details on how they would operate with fearsome ruthlessness.